Demand for heat pumps is higher than you might think

Heat pumps are no longer a novel technology, and - despite what the fossil fuel industry may try to tell you - there is a growing demand for them. They are being showcased on television, talked about on the radio, and debated online by mainstream press outlets.

This conversation hasn’t come out of nowhere.

The last few years have undoubtedly seen a real turnaround for the technology, with the Government making it clear that they are to be the primary heating system in the 300,000 homes being built in the first half of this decade.

In the Heat and Building Strategy, published last October, it was also confirmed that the target to install 600,000 heat pumps per year by 2028 would be met at a minimum.

Clearly, the role of heat pumps in the UK’s long-term plan to decarbonise heat is no longer up for debate, but that doesn’t mean to say they can be rolled out overnight. It should also be kept in mind that the step-up in ambition isn’t enough, with the Climate Change Committee’s (CCC) recent report: Independent Assessment: The UK’s Heat and Building Strategy, detailing significant gaps in meeting the Government’s target. According to the CCC’s own net-zero pathway, we should be aiming for 900,000 installations by 2028.

One of the key challenges related to the deployment of heat pumps relates to consumer demand. Are people really ready to install them in their homes or will they be reluctant to move away from what they know? Of course, sticking to what we know – which for most people is a gas boiler – simply isn’t an option if we want to meet UK climate targets. The use of fossil fuel boilers simply doesn’t align with our plans to reach net-zero, and our reliance on gas doesn’t do us any favours in terms of energy security.

But perhaps people are more likely to switch out their gas boiler than we think.

A recent survey has highlighted that up to one in three homeowners in the UK are in fact willing to adopt a heat pump when their gas boiler breaks down - even if it means paying extra. The Behavioural Insights Team (BIT) behind the analysis found that up to 25% of homeowners would in fact adopt a heat pump, even at a price of between £10,000 - £12,000, despite being able to replace their gas boiler for much less.

Read the report by the Behavioural Insights Team.

The Cost of Low Carbon Heat

Whilst this clearly indicates that there is a group of people willing to buy into the technology sooner rather than later, we know that upfront cost remains a barrier overall. Recognising that the higher price tags on heat pumps compared to gas boilers contradicts its plans to roll out low carbon heat, the Government has set an ambition to reduce the costs of heat pumps by at least 25% by 2025 and to achieve parity with boilers by 2030.

This would make a huge difference when it comes to consumer demand for heat pumps. As shown below, the analysis carried out by BIT shows that up to a third of homeowners would in fact adopt a heat pump if the price was somewhere between £4,000 to £8,000 without taking into consideration any financial support from the Government. 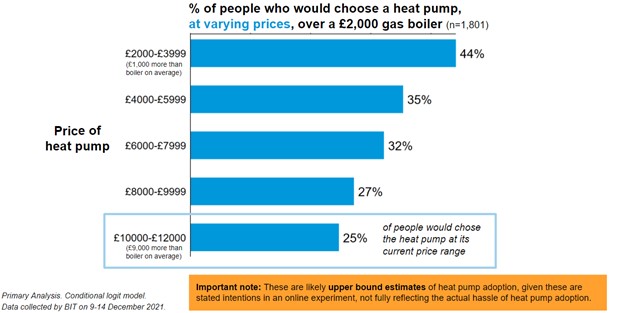 Installation costs are the biggest barrier to heat pump uptake, according to the BIT survey. Nine in ten respondents indicated that they wouldn’t choose a heat pump because of installation costs, with six in ten saying they would change their mind if they were lower.

The cost barrier doesn’t come as a surprise. We have already seen evidence that households are willing to install a heat pump provided there is financial support available, with the technology being a popular choice amongst applicants for the Green Homes Grant vouchers announced in 2020. The Renewable Heat Incentive has also shown that demand for heat pumps is on the rise, with the scheme receiving its highest number of applications in January 2022 since way back in April 2015.

With 31st March marking the scheme’s end, there are high hopes that the upcoming Boiler Upgrade Scheme (BUS) and its £5,000 to £6,000 grants, will further enable families to access and benefit from the low carbon technology, without having to pay more than they would for a gas boiler. The recent BIT analysis gives weight to this strategy by indicating that a reduction in the cost of a heat pump by £5,000 – £7,000 would produce the scale of demand necessary to reach 600,000 heat pump installations per year by 2028. The key to this success will lie in a smooth transition from the DRHI to the BUS, as businesses will need to continue installing unabated and with minimal financial or demand-related disturbances.

The new scheme, which officially launches on 23rd May is a promising step in the right direction, particularly because it tackles the upfront cost of heat pumps in a way that wasn’t addressed by RHI. However, we must see the scheme carefully administered so that demand for heat pumps not only continues but reaches an all-time high.

For more information on the Boiler Upgrade Scheme, click here.

Another financial incentive for heat pumps was also introduced this spring, with Chancellor Rishi Sunak announcing that the 5% tax on select energy efficiency materials will be abolished entirely, for all measures, including air source and ground source heat pumps. This in addition to the upcoming BUS grants could help to drive heat pump installations in hundreds of thousands of homes, but more will still need to be done to ensure that the cost barrier is well and truly overcome.

For more information about the reduction in VAT on energy-saving materials, click here.

Comments are closed for this article

Take me back to the main blog page. 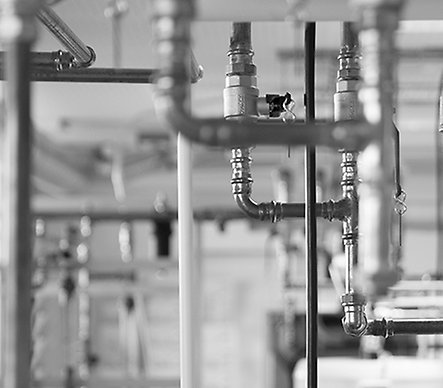 Heat pump courses
Learn everything you need to know